A few years back a cut some clear acrylic tops for my Rancilio Silvia espresso machine. I have recently switched back to a custom stainless top that I'll be posting more about soon, but I enjoyed the clear top for many years. I am posting the dwg file for it here:

To get one made, you just need to find a laser cutter somewhere. I had mine cut at pololu.com, their site is here:
customlasercutting.com I actually just talked with Pololu, and they said they will just keep the file on hand, so if you want, you can just order one directly from them and just specify you want a Rancilio Silvia Top.

There are other places that will laser cut for you too. Pololu has various different colors of acrylic, or you can send your own material in. I've always thought a wooden top or something else would be cool. Lots of options too for modifying this super basic model.

Four years ago I made a silly site for this little mod and it has some copious instructions on installation.
Posted by Tim Hirzel at 12:47 PM No comments:

So I have been wondering about non-contact measurement of voltage in AC wire.  I want to know when my espresso machine is brewing so I can turn on a shot timer.   I tried and tried looking around on-line, and eventually I realized to would faster to actually try it with my own hands, duh... 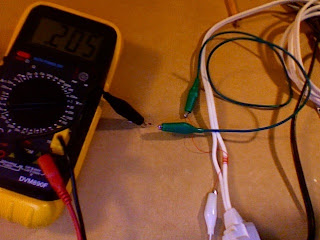 I carefully cut a slot between the two wires in an extension cord and wrapped one side with some thin insulted wire (i had some 30 gauge wire-wrap stuff from radio shack around). I wrapped it 8 times and added a resistor in series to make some voltage from any induced current. Low and behold, I can measure voltage between the two ends of the coil! At first, it was better with the AC voltage measure on my multimeter. So I swapped the resistor for a garden variety diode (i wish i had diodes in my garden), and low behold I can see 0.2 V dc!

So this setup essentially detects if my extension cord is plugged in or not.
- One twist that came up is that this extension cord has a dimmer switch in it (an inside resistor between the wall and the sensor). If switch the dimmer switch to the on mode, I am actually see when the light turns on or not. With the light off and the dimming on, I see about 0.015 volts. With the light on, it jumps up to 0.1v. With the dimmer off, it appears flat at .2 volts regardless of the lamp.

Interestingly, the voltage is positive or negative depending on the direction i set the diode. I'm sure there is a good explanation for that.

Now I want to measure this voltage with the analog inputs on my Arduino. From there, all sort of things are possible. For example, it now means that folks modifying appliances can sense current inside the appliance without interrupting the power circuits!  I'm talking to you, Rancilio Silvia modders who want to make arduino shot timers or watch the steam switch and change the target temperature on your home-made temperature controllers.  Yeah, you. ;)

Update:
A bunch of good comments and feedback coming in here.  Thanks all.  Tips ranging on better ways to do this, to why this doesn't work.  So take this with a grain of salt! One comment on hackaday mentions that that detects current, not voltage.  That doesn't add up to me since it detects if an extension cord is plugged in, regardless of whether there is current passing through (anything actually on).  Perhaps this is detecting neither current nor voltage, but detecting a magnetic field around the wire (linked to voltage presence...)?  I'm trying to dig back in my mind to E&M physics, but alas, all that dribbled out my ears a long time ago.
Posted by Tim Hirzel at 10:10 PM 18 comments: